“Win everything,” said Kevin De Bruyne when asked of his ambitions for Manchester City after signing

With less than two months of the season to play, City are still on course for a historic quadruple of Champions League, Premier League, FA Cup and League Cup.

Just breaking through the barrier of the Champions League quarter-finals would be a landmark for Pep Guardiola as he tries to reach the last four for the first time in five years in Manchester on Wednesday.

City travel to Borussia Dortmund holding a slender 2-1 lead and bearing plenty of scars from quarter-final ties over the past three years.

“Different year, same stuff,” was how a disappointed De Bruyne summed up a 3-1 defeat by Lyon in Lisbon last season.

Defensive mistakes, missed chances and VAR controversy also combined to deny Guardiola’s men as they bowed out to Liverpool and Tottenham in contrasting fashion in 2018 and 2019.

Despite the explosive talent of Erling Braut Haaland, a Dortmund side sitting fifth in the Bundesliga should not pose a problem for the runaway Premier League leaders.

But De Bruyne has lived through too many City horror shows in Europe’s premier club competition to take anything for granted.

The Champions League is the one trophy to have so far eluded the Belgian since he arrived in England in 2015.

A determination to end City’s wait to conquer Europe was key to both the player and club’s motivations for agreeing a new contract worth a reported £20 million ($27 million) a year.

De Bruyne showed he is no ordinary player off the pitch as well as on it during the negotiations.

The 29-year-old did not use an agent and instead worked with analytics companies to show the data that backed up his claim to be the key figure in City’s success.

CEO of Analytics FC, Jeremy Steele, told The Athletic: “After discussing the scope of the work, De Bruyne commissioned us to create a report studying almost every aspect of his contribution to the club.”

Among the data crunched was how drastically City’s chances of winning the Champions League for the first time would be reduced should they lose De Bruyne.

Guardiola’s men got a sense of what life without him might be like as they slumped to just a fourth defeat in 49 games this season to Leeds on Saturday.

Even with City trailing against 10-men, Guardiola kept his midfield maestro on the bench for the full 90 minutes in a clear signal of intent that his priority lies in Dortmund this week.

Two seasons ago, City became the first side to ever win the English domestic treble of Premier League, FA Cup and League Cup.

Yet, even replicating that incredible feat would now feel like a let down if they crumble again under the pressure when all of Europe is watching.

Guardiola admitted his side did feel the weight of expectancy in the first leg as they needed Phil Foden’s 90th-minute winner to take even a one-goal lead to Germany.

But this is the first time City have had a quarter-final, first leg lead to defend under Guardiola.

The former Barcelona and Bayern Munich boss has managed the entire season with this month in mind.

The base for City’s success has been built on a solid defence rather than a prolific attack. Marco Reus’s away goal at the Etihad was the first Guardiola’s men had conceded in over 800 minutes in the Champions League.

Should they score on Wednesday, Dortmund will need three to progress without the need for penalties, which no side has managed against City since Leicester tore a makeshift defence to shreds in September.

Guardiola has also made the most of the vast resources at his disposal. For the first time in months, the seven changes he made for the visit of Leeds backfired to delay City’s coronation as English champions for a third time in four seasons.

But that will be a small price to pay if a refreshed De Bruyne inspires his side to take another big step to realising his ambition of total domination. 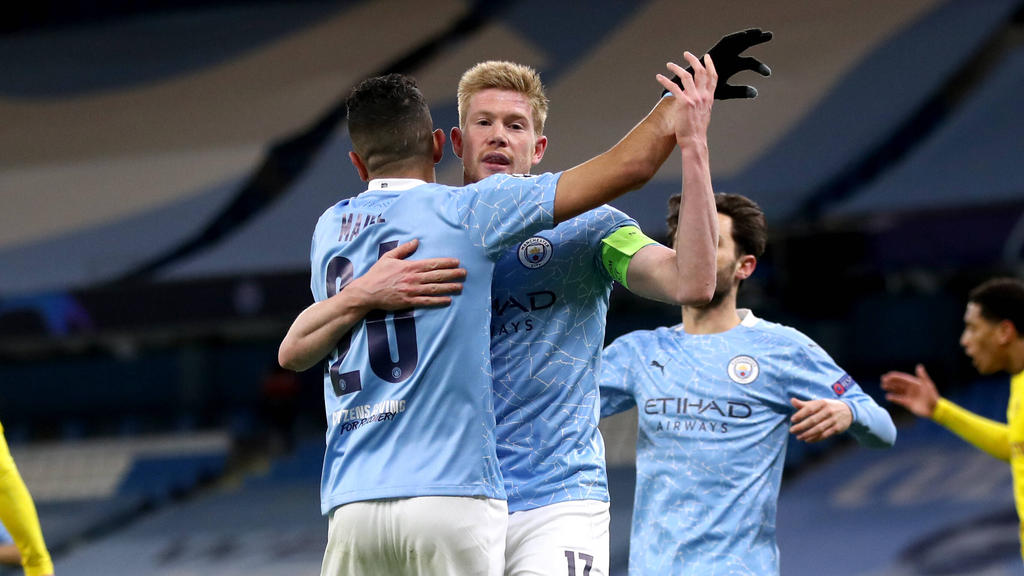